Featuring heroes from the theatre of war to theatres of the West End, television, film, popular music and even fine art, Dancing with Heroes was undoubtedly the best ball of the London season. 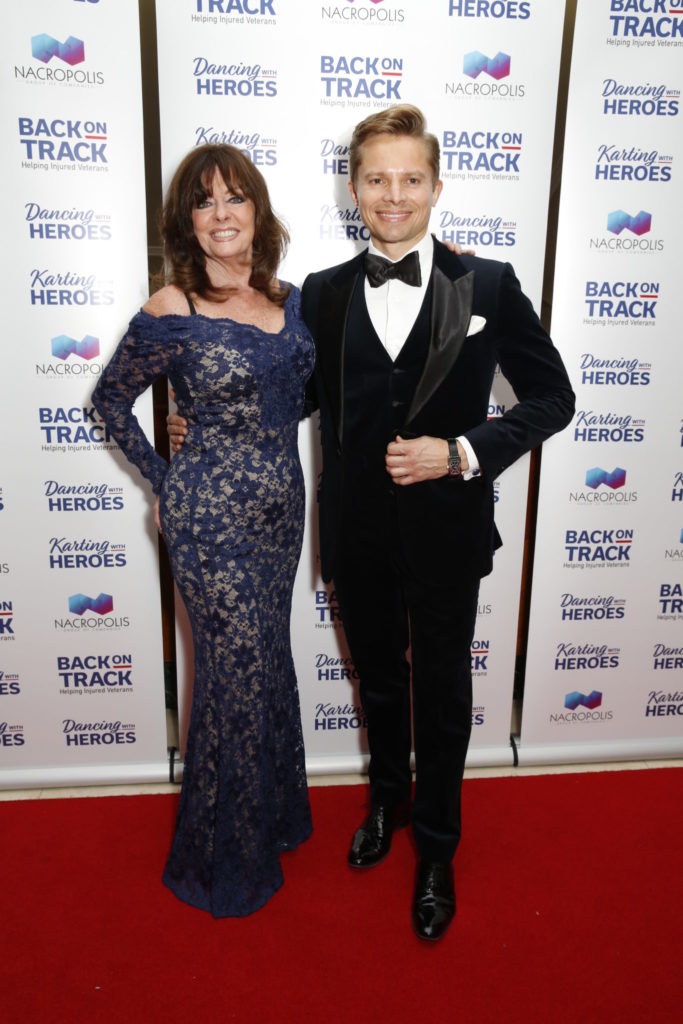 The glittering showbiz event was staged in aid of the charity Back on Track  at the Hilton Hotel on 23rd November leaving guests high from the amazing roster of entertainment. 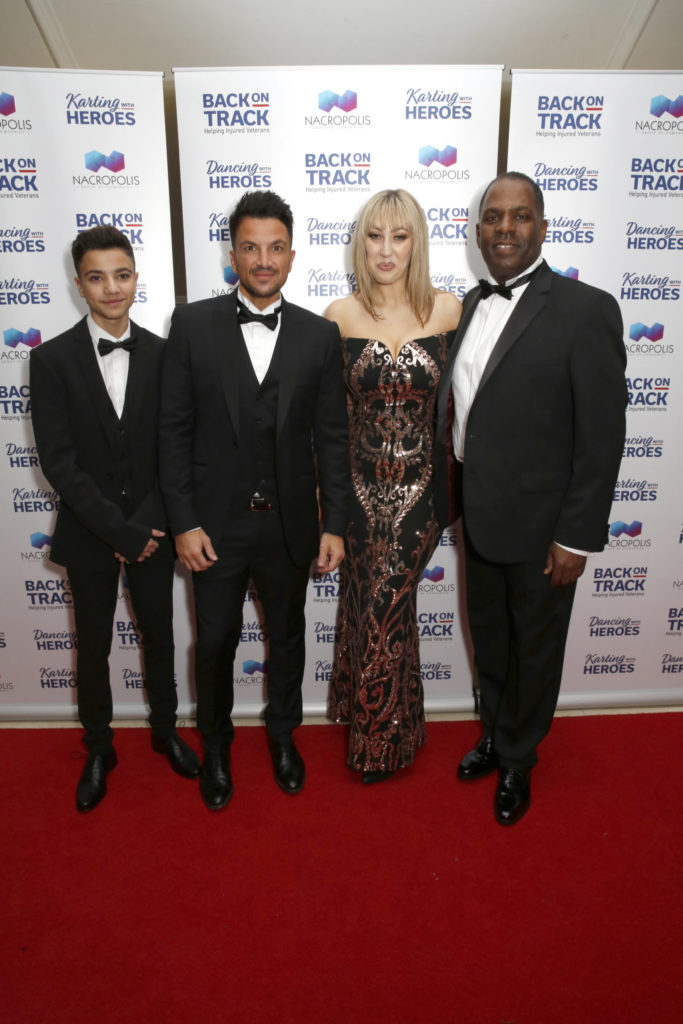 Back on Track was founded by Dr Aamer Khan and Lesley Reynolds of  Harley Street Skin clinicto provide surgical and medical, psychological and practical support for service personnel who have been badly injured or disfigured whilst serving our country.
Johnson Beharry, awarded the Victoria Cross – our highest military decoration and Mark Allen, double amputee and charity ambassador, rubbed shoulders with stars more commonly seen at the Queen Vic such as Gillian Taylforth and Billy Murray, along with TV favourites Glynis Barber, Carol Harrison, Chizzy Akudolu and several members of the Royal Household. 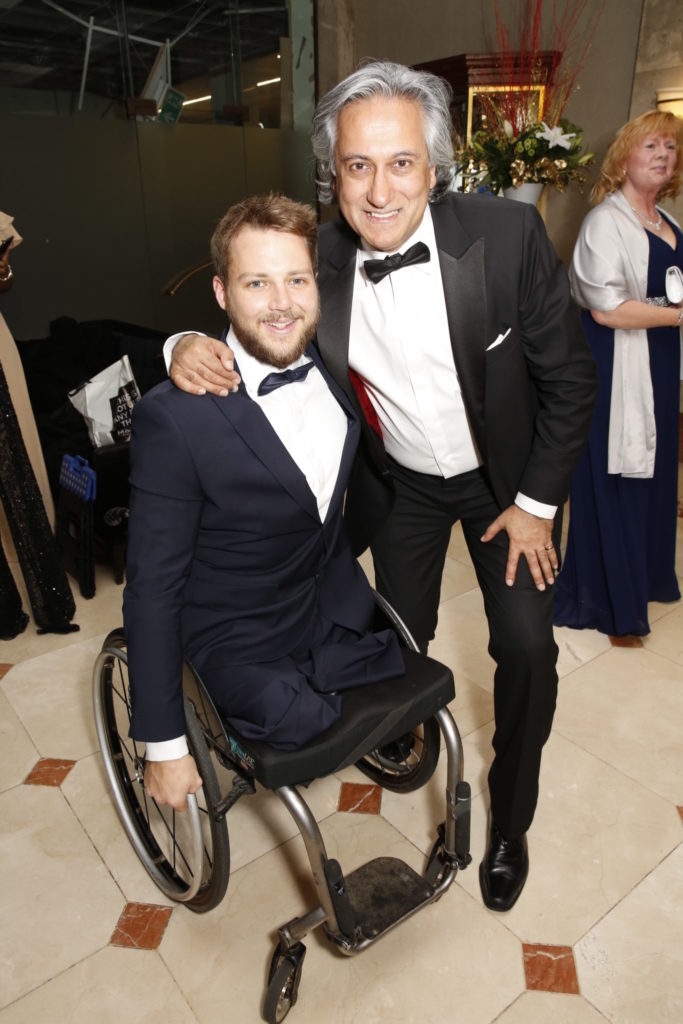 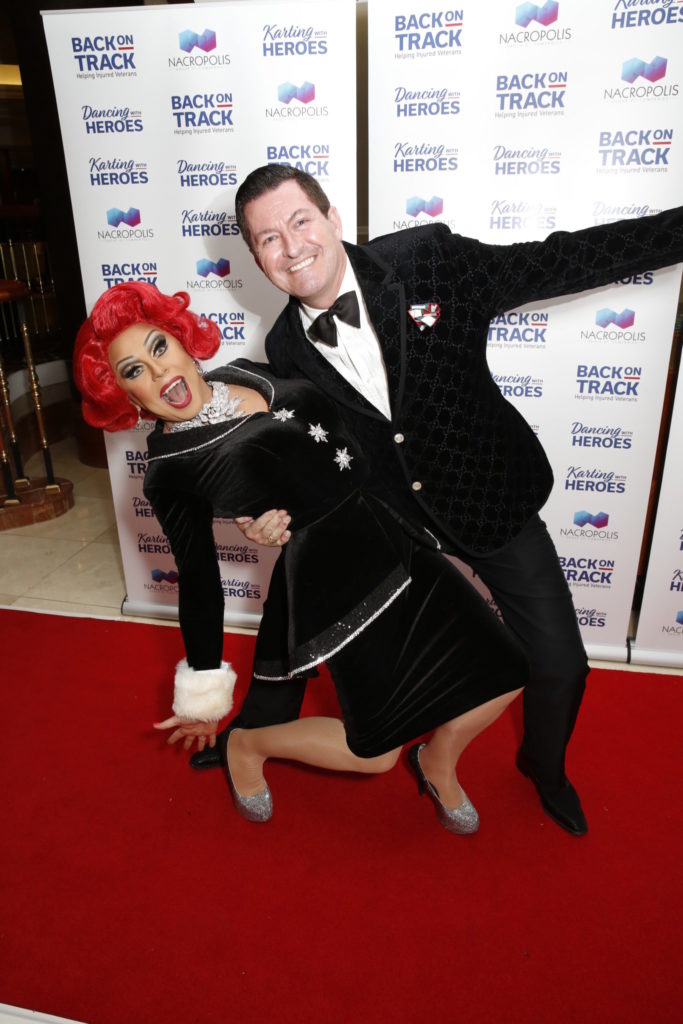 The highlight of the evening came with a high octane performance from Peter Andre who electrified guests by dancing on the tables in front of his son Junior. 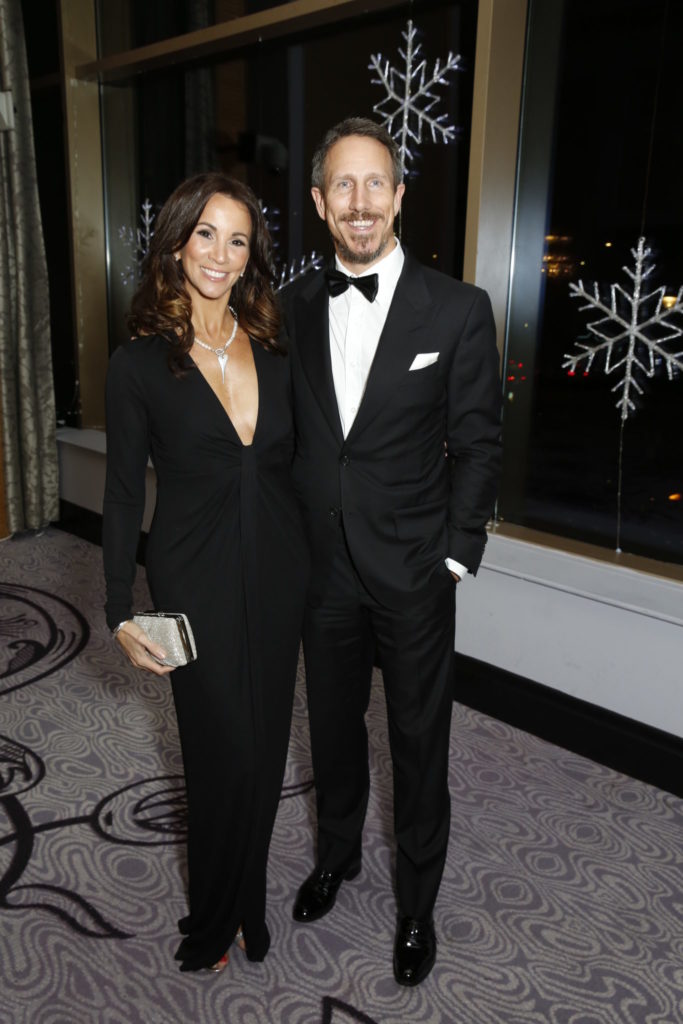 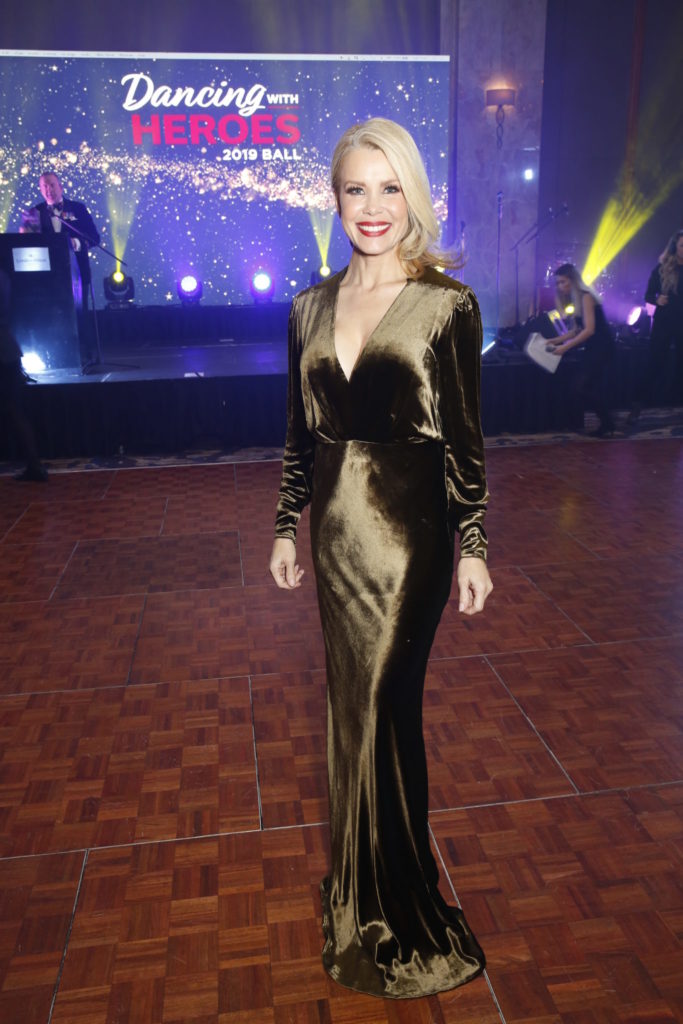 It was a first for 14 year old Junior who joined the Pop Prince on the red carpet earlier in the evening in matching tuxedos before dancing with fans on the dance floor! 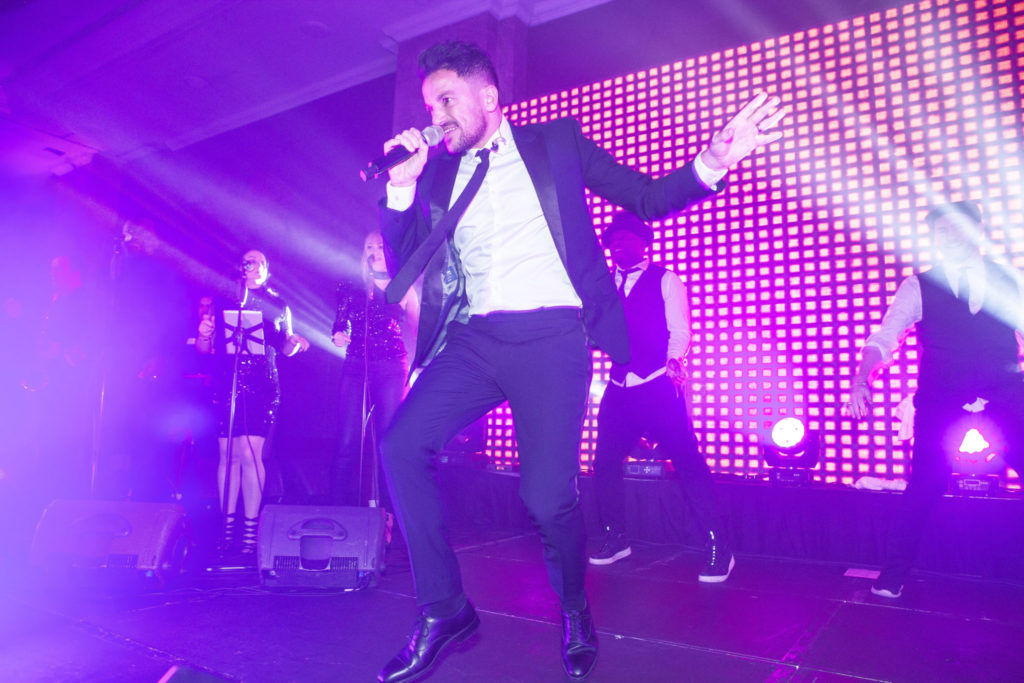 The Pop Prince chose the occasion to unveil his new collaboration with the legendary multi-instrumentalist Mo Pleasure, formerly of Earth Wind & Fire, in a headline performance of soul and funk classics and a little Mysterious Girl that sent the audience into a frenzy. 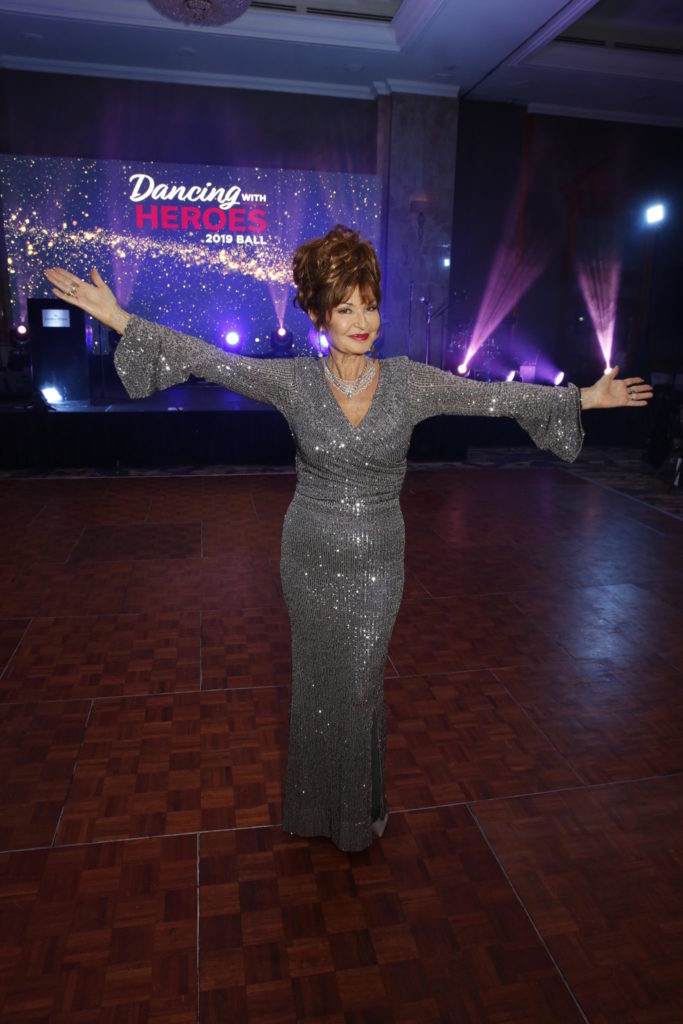 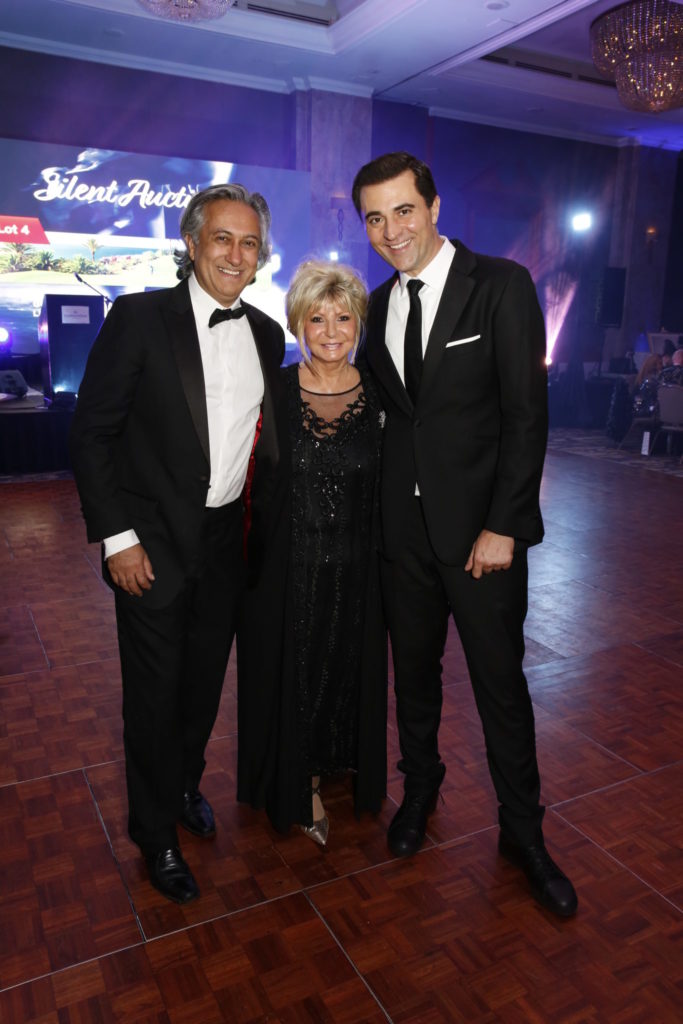 Peter shared videos and photos of the night via his Instagram. They showed him whipping an audience of captains of industry and captains of the armed forces into a mosh pit of dance frenzy.
“By the end it was fire” Peter revealed on his Instagram update, “People rammed the stage and one fell hard…oops, it was an amazing night with my wonderful son Junior” he added. 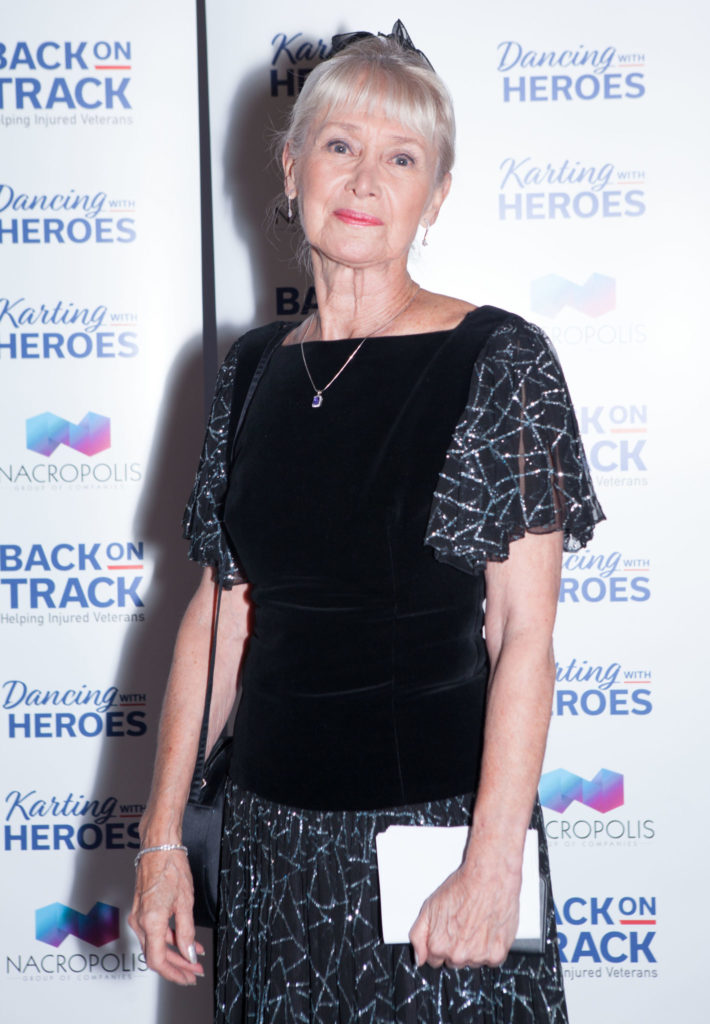 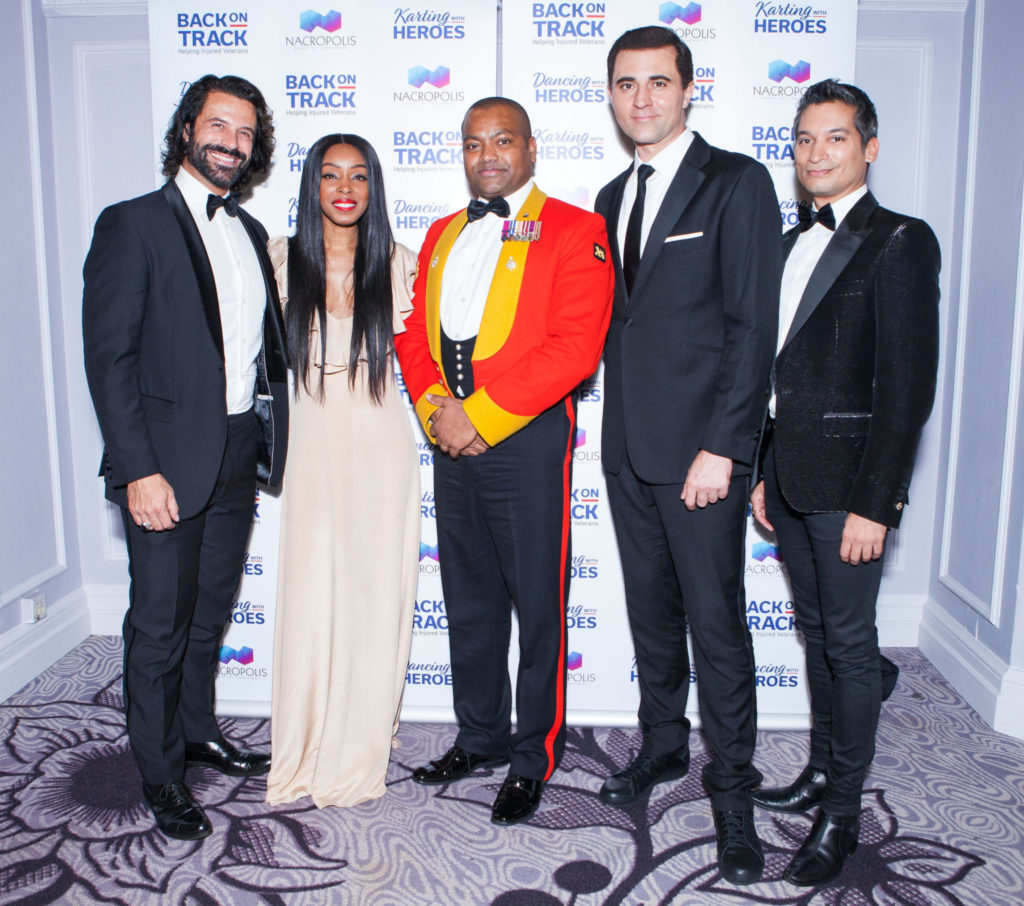 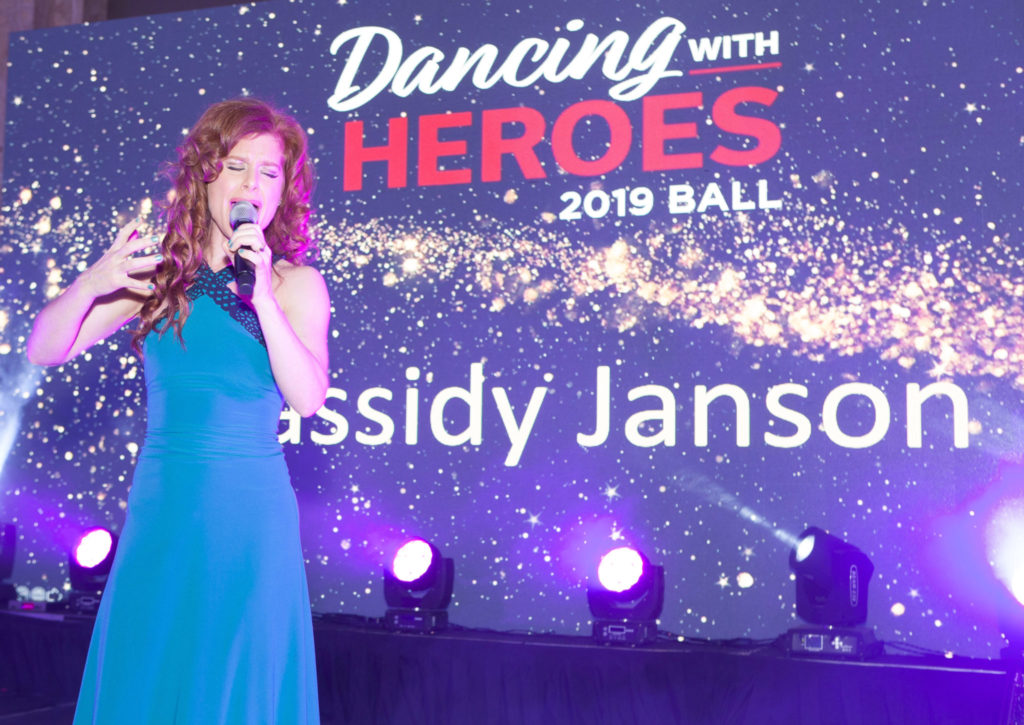 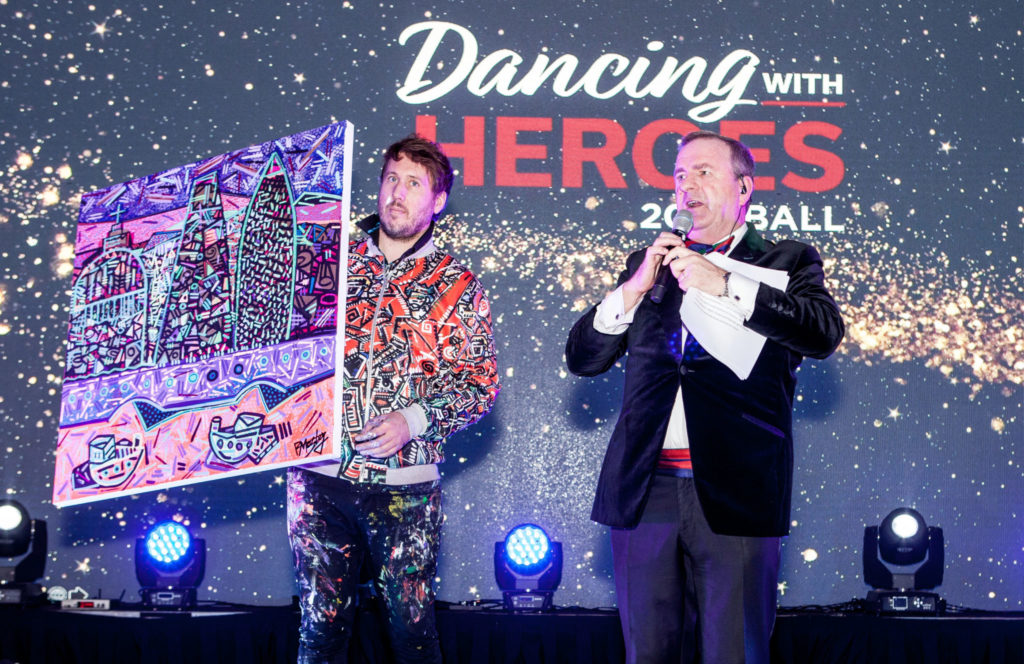 However, their ballgowns paled against the outrageous award-winning cabaret artist La Voix, also known as The UK’s Funniest Red Head who never goes out underdressed. She was a vision to behold in her high-end haute couture two piece and faux fur stole. 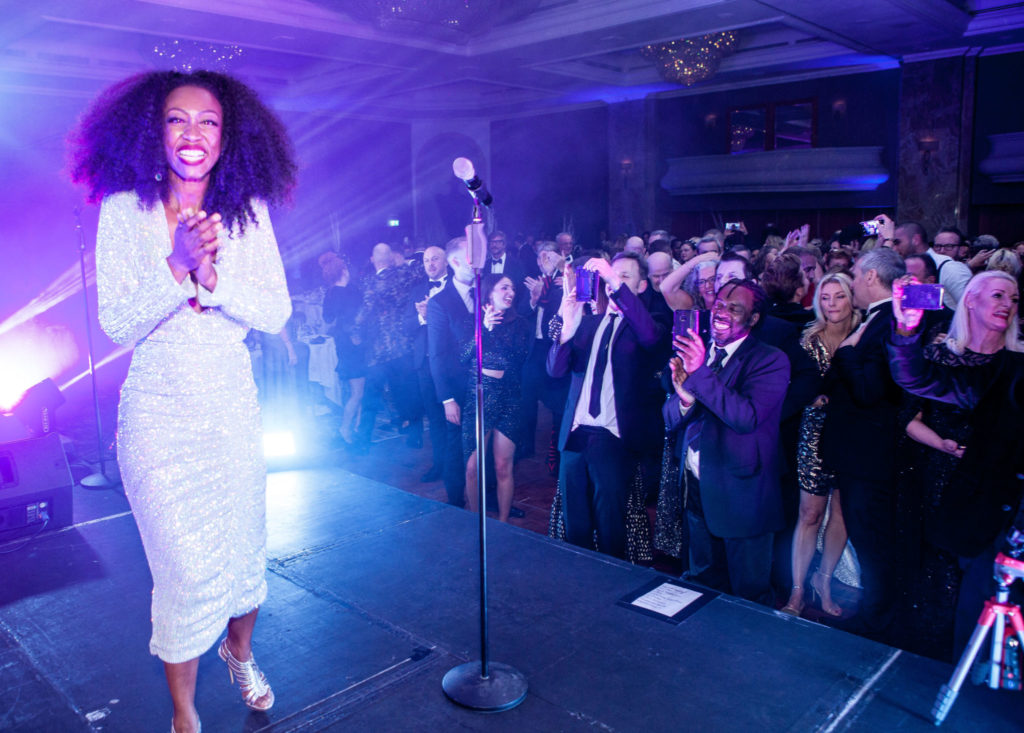 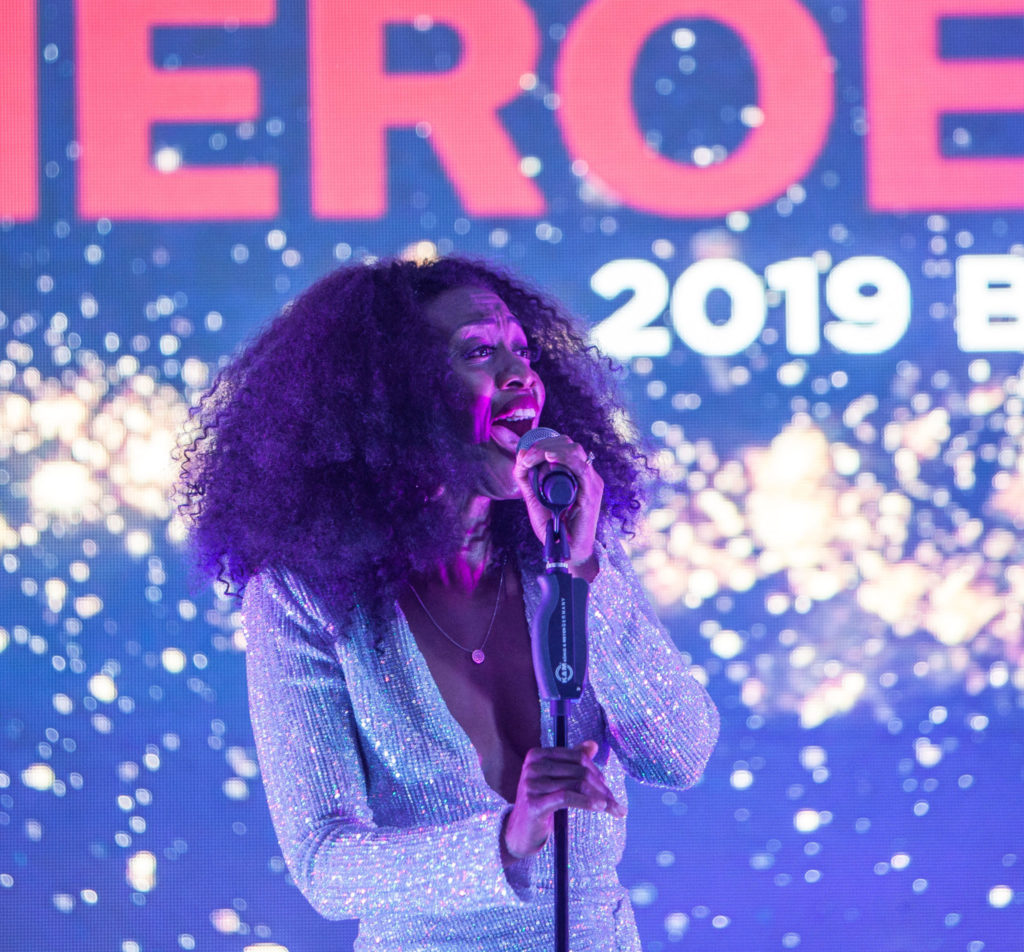 The former BBC newsreader Jan Leeming presented an unique art auction featuring the work 15 of London top artists who depicted ‘A Soldiers’ Return’ in both sculpture and on canvas. Curated by the charity Artistic, the artworks featured: Mason Storm, best known for his trademark mask and considered by some to be Banksy and other contemporary artists including: Louise McNaught, Pez, Dan Pearce, Kelvin Okafur and the emerging talented sculptor Jack Nicholas Banbury. 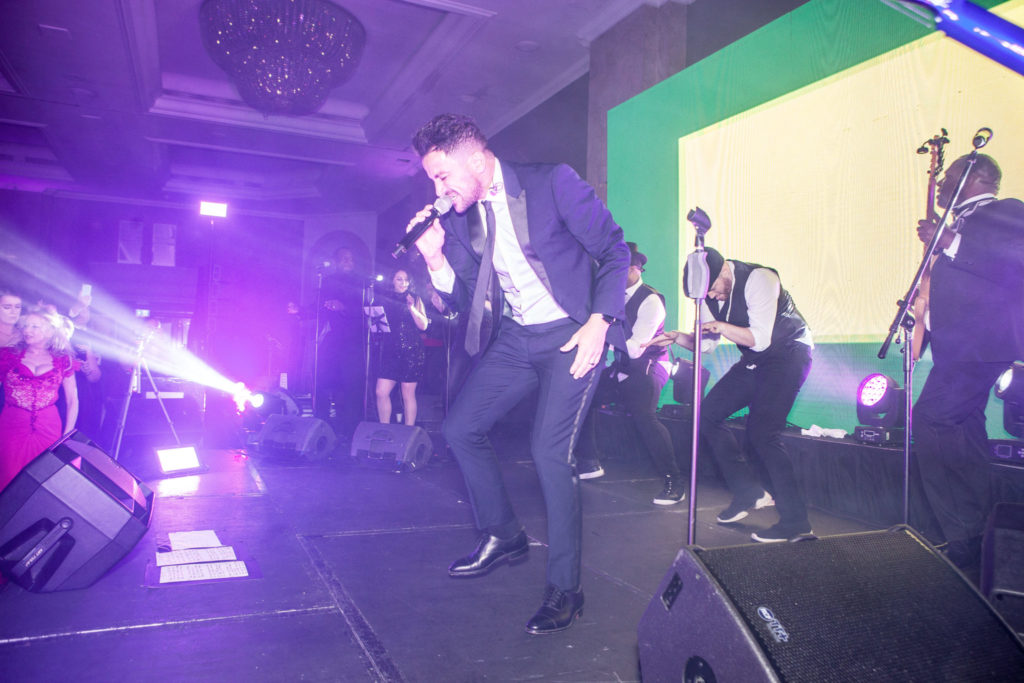 As the night rolled on Beverley Knight MBE had the audience on their feet during a medley of hits from her leading roles in the Bodyguard and Cats. Cassidy Janson delivered a powerhouse performance from her title role of Beautiful and the suave Darius Campbell crooned as Sky Masterson from the Olivier award-winning show Guys and Dolls.
Meanwhile, side shows included: the enthusiastic Chico acting as a self-appointed ringmaster working the crowd; Gary Edwards, former presenter on the US Internet version of Dancing with the Stars, who showed La Voix a few steps before looking astounded at the leaping ability of 2018 Strictly Come Dancing participant Danny John Jules. Richard Jones, ex Household Cavalry and 2016 Britain’s Got Talent winner produced some ‘dance magic’ and Sean Dooley joined in the fun following his successful musical collaboration for BBCs Children in Need.

Throughout the night, live and silent auctions continued to raise money for Back on Track with exclusive items offered including: celebrity memorabilia, sports and entertainment hospitality packages such as a meet and greet with Alfie Boe and Michael Ball, luxury goods and experiential events including training and parachuting with the Red Devils. 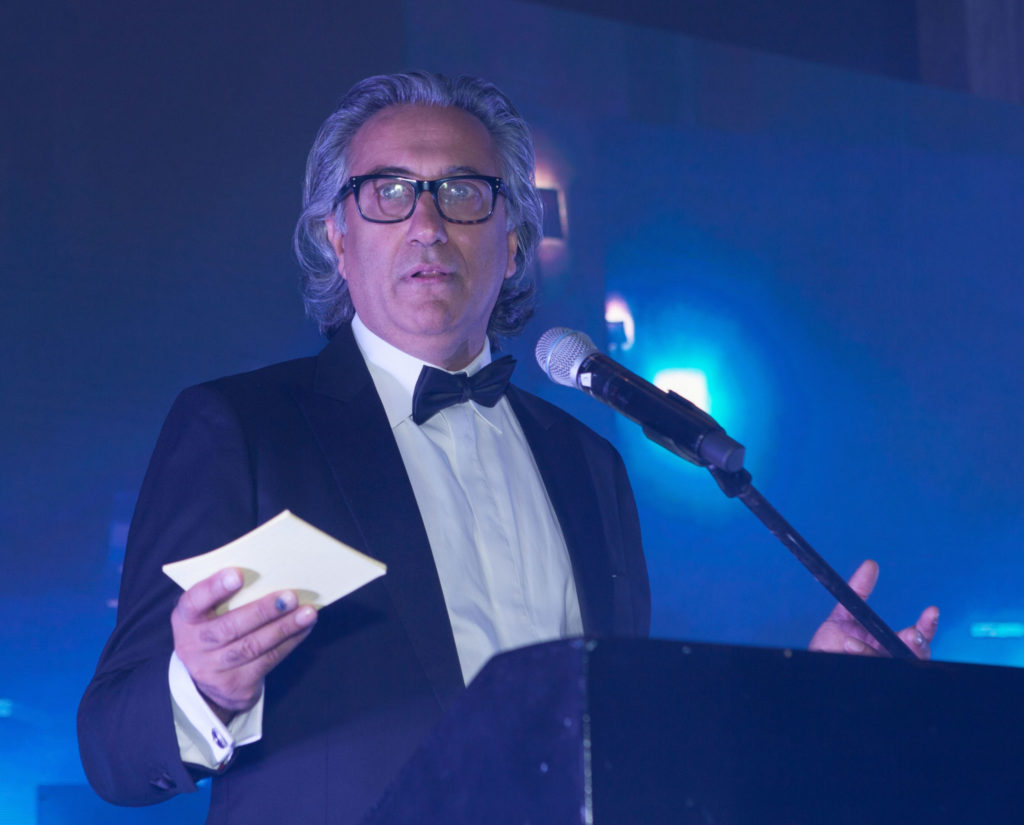 Back on Track charity founder Dr Aamer Khan commentedon the night: “British troops are recognised as the best in the world.  They are heroes, but even heroes get hurt. Some injuries are psychological, but more often than not limbs are lost or severely damaged, and most wounds cause extensive scarring. Many casualties are young men and women in the prime of their lives whose confidence has been damaged along with their body and they believe that they will never be able to lead normal lives again. It is our job to help them to do so.

“We wanted to lay on an extraordinary event to showcase our charity to raise much needed funds to ensure the continuance of our work.  I think we have achieved that. Back on Track may be small, but we are mighty!”

And with so many guests already booking their tickets for next year, Dancing with Heroes is clearly the must haveticket for 2020. Go to: Back on Track 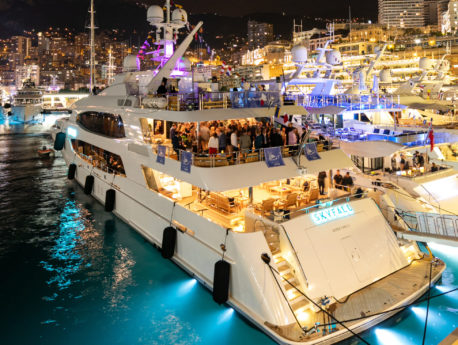 A Movie with Ambition Anastasiya Lvova